How COVID-19 is affecting hourly work

Snagajob is here to help you navigate the hourly hiring landscape during this pandemic. Our proprietary data gives us a unique perspective on hourly job trends and we can see how both workers and employers are responding in real-time. One of the most valuable things we can offer you is a view into these insights and hiring trends. We’re here to give you helpful context as you make business decisions.

Jobs are up 17% week over week, and up 29% since the Fourth of July. Overall, jobs are up 4% over pre-pandemic levels. There are two main factors contributing to job growth—many new roles have been created to address consumer preference and public health and safety (curbside pick-up, cart sanitization) and some industries have seen a huge spike in consumer demand (eComm, grocery). In fact, Amazon announced today that it is nearing 1 million employees.

The news of job growth is tempered by the fact that there are an unprecedented number of job seekers in the market currently. In February, there were 5.8 million unemployed people in the country. Today, there are 18 million unemployed people. It’s a tough environment for job seekers—there aren’t enough jobs to meet the demand. And it’s a critical reminder of the importance of extended unemployment benefits.

Of those workers who were receiving additional CARES Act unemployment benefits, 61% are anticipating and planning on an extension, according to our recent survey. However, those workers are currently in limbo waiting for the government to announce the updated plan.

Here are the latest job numbers by industry:

Quick service restaurant (QSR) jobs are down 1% week over week, down 3% month over month, and down 27% since early March.

Sit-down restaurant jobs are down 1% week over week, flat month over month, and down 51% since early March.

Grocery jobs are flat both week over week and month over month, and up 14% since early March.

Hospitality jobs are down 1% week over week up 20% month over month, and down 49% since early March.

Convenience store jobs are up 1% week over week, up 10% month over month, and down 9% since early March.

Healthcare jobs are flat week over week, up 8% month over month, and up 15% since early March.

Google searches for part-time jobs are up 7% week over week.

We’re staying tuned in to economists, industry leaders and credible data sources—including our own—and we’ll keep you informed as the job market evolves in the critical weeks ahead.

As always, we continue to talk to hourly workers and employers to see how they’re feeling about the situation. You can find that information in our weekly infographic. 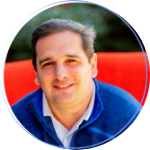 Mathieu Stevenson is the Chief Executive Officer of Snagajob. Appointed in 2019 after previously serving as Snagajob’s Chief Marketing Officer, Mathieu and his team are focused on using data and AI to realize the vision of becoming the first truly on-demand platform for hourly work, instantly connecting millions of hourly workers with hiring employers. Mathieu brings deep technology and marketplace experience across venture owned and public companies, including leadership roles at McKinsey & Company, HomeAway Inc (NASDAQ: AWAY), and most recently, Blucora Inc (NASDAQ: BCOR) where Mathieu served as Chief Marketing and Strategy Officer. Mathieu and his wife Catie have three active, young boys. The family is enjoying their new home and community in Richmond, VA. Mathieu is a graduate of the University of Texas at Austin and attended the Fuqua School of Business at Duke University where he received his Masters of Business Administration. His first hourly job was as a lifeguard. 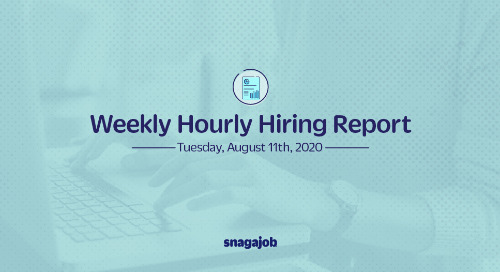 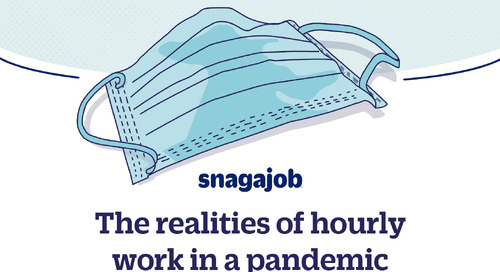 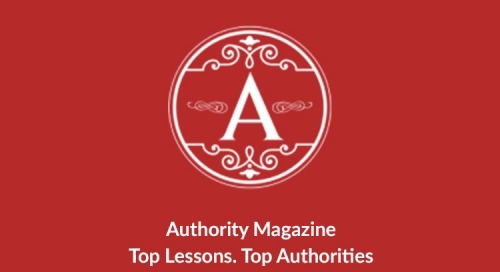 Candace Nicolls of Snagajob: 5 Things You Need To Know To Successfully Manage a Remote Team

Managing a remote team and finding it harder than you thought? Our SVP of people and workplace Candace Nicolls shares tips and advice on how to master this while simultaneously empowering employees. 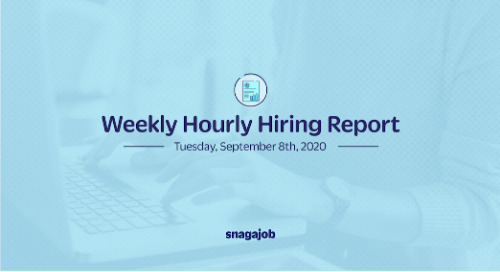 We’re seeing jobs up 8% week over week, down 5% month over month and down 2% since early March. 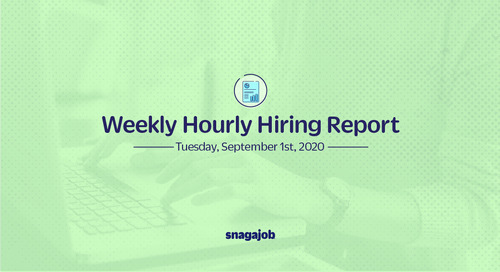 Overall, jobs are down 17% week over week, up 2% month over month and down 11% since early March. 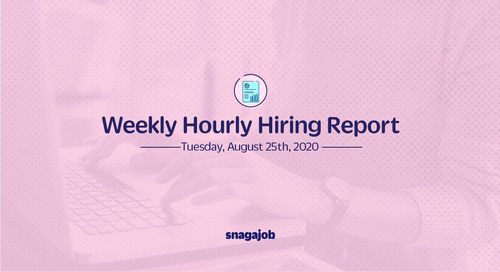 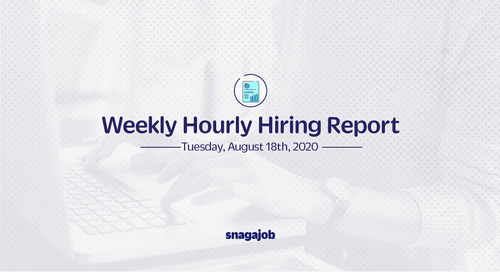 We’re seeing overall jobs are down 3% week over week, up 14% month over month and up 1% since early March. 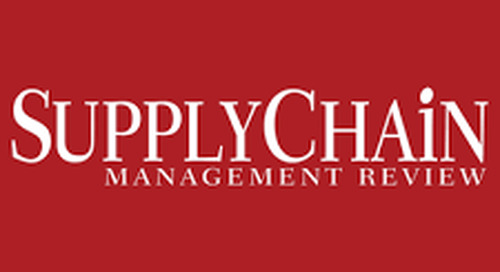 The pandemic challenged the market with a 546% increase in supply chain-related jobs. Snagajob is developing tools to document worker skills and experience and match them. 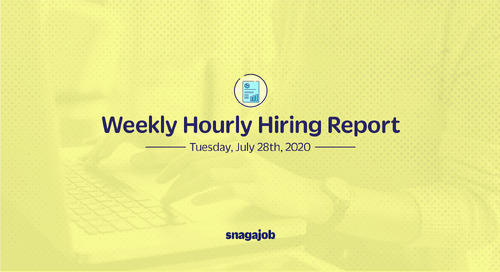 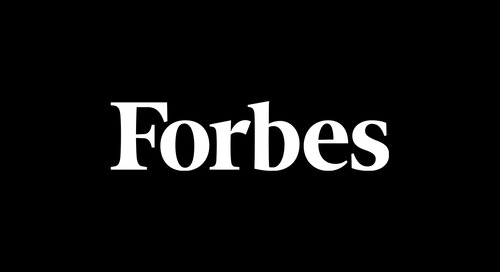 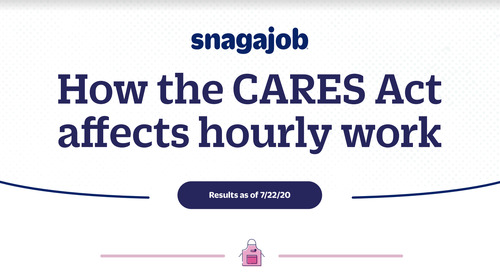 61% of workers on unemployment are planning on a CARES Act benefit extension. Find out more about how the CARES Act is affecting hourly workers and employers. 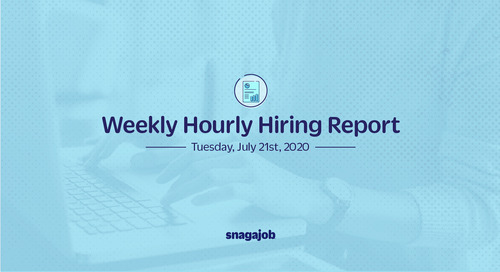 Overall, jobs are only down 11% from pre-pandemic levels, which is a huge gain from when they were down 53% at their lowest on 4/18. 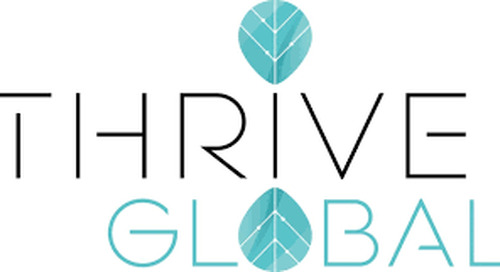 See why CEO Mathieu Stevenson remains optimistic about the post COVID economy and how he plans to help rebuild. 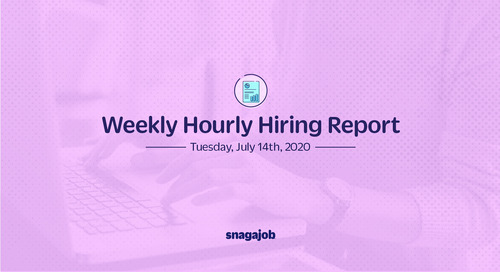 Jobs are up 23% in the last month, even as the virus surges across the US. 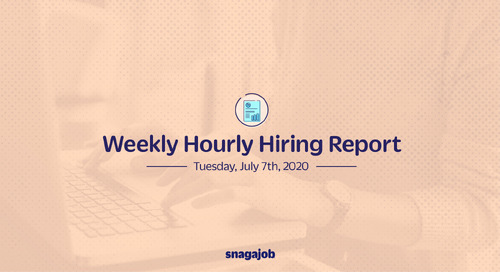 Jobs are up 13% in the past week. Overall, jobs are only down 18% from pre-pandemic levels in early March. Check out our weekly data report for more. 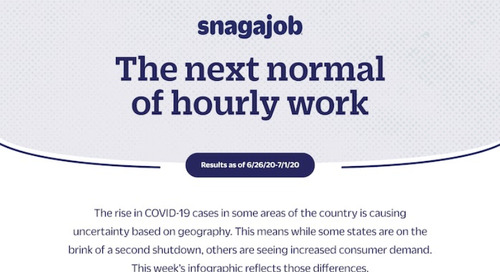 The rise in COVID-19 cases in some areas of the country is causing uncertainty based on geography. This week’s infographic reflects those differences. 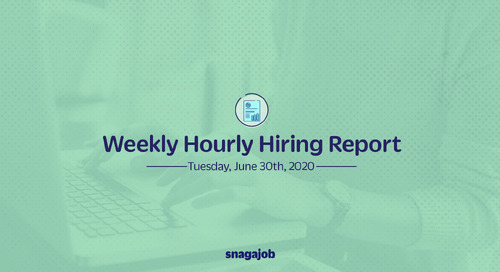 Jobs are up 18% in June, jobs are returning with just a few stops and starts as COVID-19 is rising in certain areas, but they’re up 3% week over week. 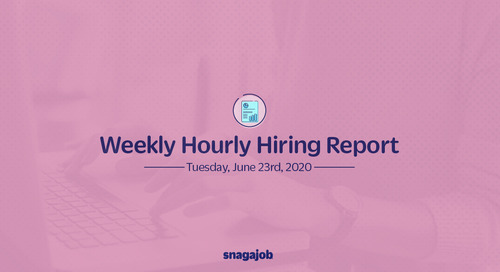 The rise in COVID-19 cases in certain states has created a mixed bag of hiring trends across the country. Job growth is happening differently across industries and geographies. 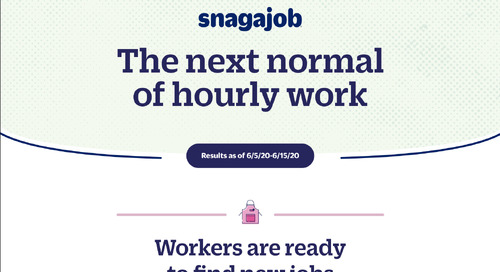 We surveyed about 100 employers and over 1,000 workers to see how they're feeling, see what they told us. 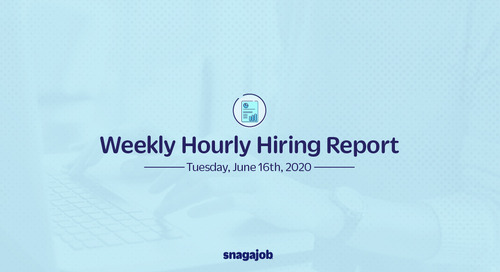 This week, job growth is flat, but we’re confident this isn’t the full story. Jobs are up 11% in June, and still down 32% from pre-pandemic norms.